EghtesadOnline: Oil climbed to its biggest weekly advance since April as Saudi Arabia signaled it’s prepared to discuss stabilizing markets at informal OPEC discussions next month after prices tumbled into a bear market.

Futures rose 2.3 percent in New York after surging 4.3 percent on Thursday. Talks with OPEC members and other producers may result in action to stabilize the market, Saudi Arabia’s Energy Minister Khalid Al-Falih said in a statement, according to media reports including Reuters. Global markets will continue to rebalance this year, the International Energy Agency said Thursday. 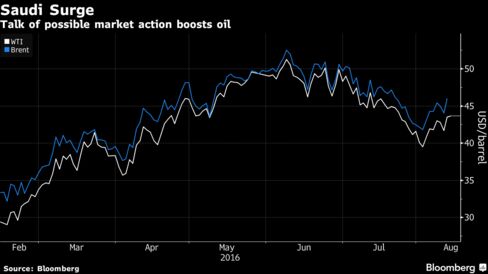 Oil has fluctuated after falling more than 20 percent into a bear market and closing below $40 a barrel last week. Money managers increased wagers on declining West Texas Intermediate crude prices to a record during the week ended Aug. 2, government data show.

"We saw the bounce at $40 and then that got accelerated on this Saudi rumor," said Jay Hatfield, president of Infrastructure Cap Advisors LLC, a New York-based hedge fund. "If you’re short oil, you don’t want to be shorted if Saudi Arabia announces a production cut."

WTI for September delivery rose $1 to settle at $44.49 a barrel on the New York Mercantile Exchange. Prices climbed 6.4 percent this week. Total volume traded was 5 percent above the 100-day average.

Brent for October settlement increased 93 cents, or 2 percent, to close at $46.97 a barrel on the London-based ICE Futures Europe exchange. Prices are up 6.1 percent this week. The global benchmark crude traded at a $1.79 premium to WTI for October delivery.

World refiners will process record volumes of crude this quarter, shrinking stockpiles, the IEA said in its monthly report. Nigeria’s oil minister said the country’s output is "dismal" this year after sustained attacks by militants have damaged infrastructure including its biggest export terminal.

While the market is on the path to rebalancing, reducing the inventory overhang of crude and products will take time, Al-Falih said in the statement. Saudi Arabia raised production to a record last month, according to data the country submitted to the Organization of Petroleum Exporting Countries. U.S. oil explorers added 15 rigs this week, the longest streak of drilling expansion since April 2014.

OPEC will hold informal talks at the International Energy Forum in Algiers, Mohammed Al Sada, Qatar’s energy minister and holder of OPEC’s rotating presidency, said in a statement on Monday.

"I think rebalancing is going on, and it took a while for U.S. production to go down, but it is down now," Daniel Yergin, vice chairman of consulting firm IHS Markit, said in a Bloomberg TV interview. "$50 is probably the stabilization price. You see some companies saying that in this range they can actually make money.