Oil Bulls Rewarded as Crude Surges After OPEC Output Accord

EghtesadOnline: Oil investors’ bullish bets on last week’s OPEC meeting paid off. While most analysts weren’t expecting a deal, money managers increased wagers on rising prices by the most since January ahead of the Organization of Petroleum Exporting Countries’ talks in Algiers.

Oil capped the biggest monthly gain since April after the group announced Sept. 28 an agreement to limit production for the first time in eight years, reports Bloomberg.

"There’s been a lot of skepticism," said Eric Nuttall, who manages a $130 million (C$171 million) energy fund at Sprott Asset Management LP in Toronto. "OPEC has changed since the last cycle. They’ve just gone through the worst selloff of oil in history. I’m more bullish than I was, and I was bullish before."

Investors increased their long position in West Texas Intermediate crude by 24,131 futures and options, or 8.1 percent, during the week ended Sept. 27, according to the Commodity Futures Trading Commission. Bets on falling prices dropped, after increasing at the fastest pace in more than a year during the previous week. 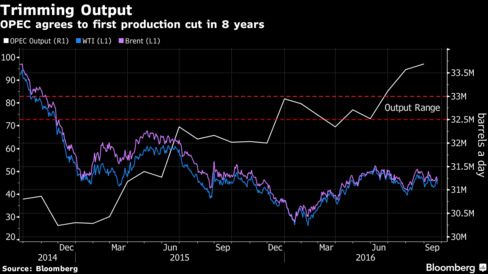 OPEC surprised most analysts by agreeing on the framework for a deal to limit crude output as a supply surplus persists amid the two-year oil slump. Ministers said the group will keep production in a range of 32.5 to 33 million barrels a day. Earlier this month, Saudi Arabia signaled a decision was unlikely at the meeting, which would instead be a chance to consult.

"They did show they are going to defend prices," said Rob Haworth, a senior investment strategist in Seattle at U.S. Bank Wealth Management, which oversees $133 billion of assets. "They don’t want to see market volatility below $40 and are willing to defend it."

OPEC pumped a record 33.69 million barrels a day in August, according to a Bloomberg survey, with Saudi Arabia boosting output to an all-time high.

But it’s challenging for the group to follow through on the cuts -- and, historically, there’s been a "credibility problem," he said. While the deal could add as much as $10 a barrel to oil prices, Goldman Sachs Group Inc. said it’s unclear how the plan will be implemented.

Russian Finance Minister Anton Siluanov questioned the plan andsaid Sept. 30 the country will not revise its budget outlook, which is based on the assumption that oil will average $40 a barrel the next three years.

Citigroup analysts pointed to OPEC’s plan to set up a committee to negotiate how to divide up cuts among members, noting that “this is still kicking the can down the road.” Iran, Nigeria and Libya have said they’re exempt from a deal.

The last attempt for an output deal collapsed in April when Saudi Arabia insisted on Iran’s participation. Iran is in the process of restoring exports after sanctions on its nuclear program were lifted in January.

In other markets, net-bullish bets on gasoline rose 5.7 percent to 23,089, while prices gained 2.1 percent during the report week. Net-bearish wagers on U.S. ultra low sulfur diesel increased 11 percent to 2,392 as futures rose 0.3 percent.

Despite the questions and caveats, the announcement reflects a notable shift, said Ed Morse, head of commodities research at Citigroup Inc. in New York.

"This is a big departure for the Saudis," he said.